An attempt to abrogate the placebo response does not seem to have gone as planned.

Aptinyx’s share price doubled in pre-market trading after it reported phase II data on its NMDA receptor modulator NYX-783 in patients with post-traumatic stress disorder. A closer examination of data not included in the press release, however, reveals that the readout is not as clear as investors might hope.

Only some of the components of the primary endpoint reached significance, and even then not at all doses and not in all stages of the trial. Aptinyx is determined to head into pivotal trials, but the group’s contention that the data validate its NMDA receptor modulation platform looks a little optimistic.

Aptinyx needed a pretty unequivocal hit in the phase II study if it wanted to restore confidence in its novel approach to hitting the NMDA target, which was knocked badly by the failure of the similarly-acting NYX-2925 in diabetic peripheral neuropathy at the start of last year. It does not appear to have obtained one.

The phase II PTSD study had a sequential parallel comparison design – a method developed to reduce the high placebo response often seen with CNS drugs. Such a study is conducted in two placebo-controlled stages: those that respond to placebo in the first stage are removed from the final analysis. Those given placebo in stage one who did not respond were re-randomised to drug or placebo, and only data from these patients were considered in the analysis of stage two. In Aptinyx’s trial, results from the two stages separately and pooled together were presented. The primary endpoint was improvement on the clinician-administered PTSD scale for DSM-5 (Caps-5) total score, as well as its various subscores, with the statistical power seemingly split over several cuts of the data.

On the total Caps-5 measure, neither stage one nor stage two patients met significance versus placebo at either of the NYX-783 doses tested – 10 and 50mg once-daily. Neither did the pooled population. 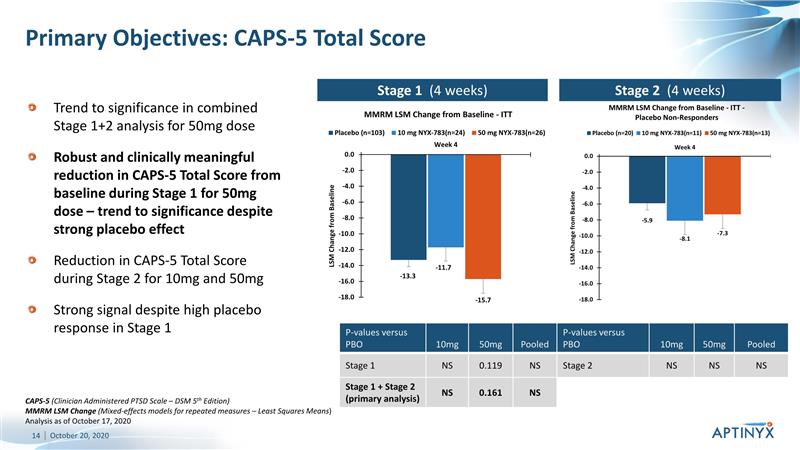 A subscore concerning negative cognition and mood squeaked significance versus placebo at p=0.049 – but only at the 50mg dose and only when the stage one patients were analysed. The stage two patients, who might be expected to respond better than those in phase one, did not do any better on drug than on placebo. The pooled data missed significance on this subscore too.

A better finding came on the Caps-5 arousal and reactivity score, which evaluates symptoms including hypervigilance, aggression and reckless or self-destructive behaviour. Here the pooled data from stages one and two met significance at both doses. But in stage one, only the 50mg dose hit significance, and in stage two, only the 10mg dose did. 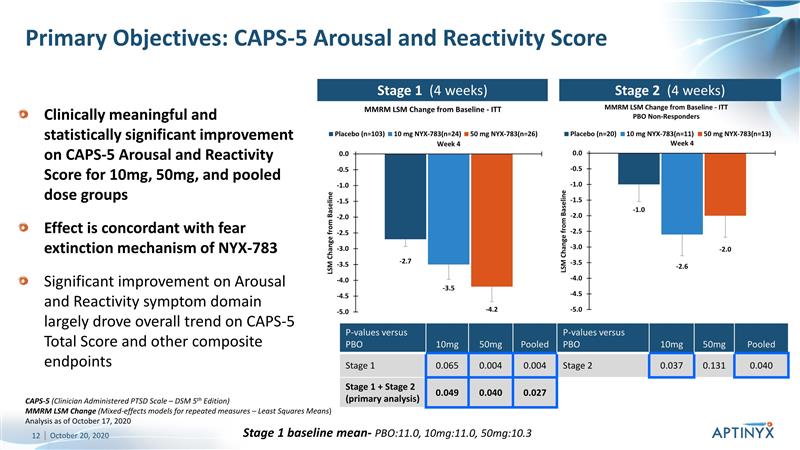 This puzzling lack of a dose response, the opaque findings on the subscales and the pretty comprehensive failure on the total Caps-5 score would appear to add up to less than a slam-dunk. At least the safety data were in NYX-783’s favour, with rates of adverse events similar in the treatment and placebo groups.

Aptinyx intends to start a pivotal study next year. It is not yet clear what might be used as the primary endpoint, or whether this future study might use a similar two-stage design.

The group's shares have now fallen back from the pre-market jump, but are still trading around 43% higher, suggesting that some still regard the trial as a success. But the strength of any conclusions that can be drawn are surely diminished by the study's complicated statistical design.

Aptinyx discovers the perils of the data dredge

T3D puts a bet on Alzheibetes

Drug makers leave the pain behind