Celldex looks beyond oncology for a resurgence

After several cancer failures Celldex tries its hand at autoimmune disease, and the market likes it.

Celldex’s history as a biotech has been nothing if not varied, and its latest chapter has just opened, with results presented late on Friday suggesting that a relatively new pipeline project, CDX-0159, put 100% of urticaria patients into remission.

Though the phase 1 data are very early, the fact that a single dose of this unusual monoclonal antibody directed against Kit tyrosine kinase prompted such a high response rate seems highly encouraging, and the group’s stock put on 30% this morning. After two major failures trying to become a cancer company, Celldex might strike it lucky as an autoimmune disease player.

This is not to say that Celldex no longer has an oncology focus; its clinical pipeline includes the anti-CD40 MAb CDX-1140, in trials in various cancers including pancreatic, and CDX-527, a bispecific targeting PD-L1 and CD27 that should yield phase 1 data across multiple tumour types this year.

But CDX-0159 now tops the company’s pipeline list, and a poster unveiled on Friday at the European Academy of Allergy and Clinical Immunology congress shows why.

20 urticaria patients have received a single 3mg/kg IV dose of this project at a June 11 cutoff, and all 19 evaluable subjects have shown clinical response as assessed by provocation testing; moreover, all but one of the 19 responses were classed as complete, Celldex said. Common adverse events included changes in hair colour and taste perception, which the company said were consistent with inhibition of Kit signalling. 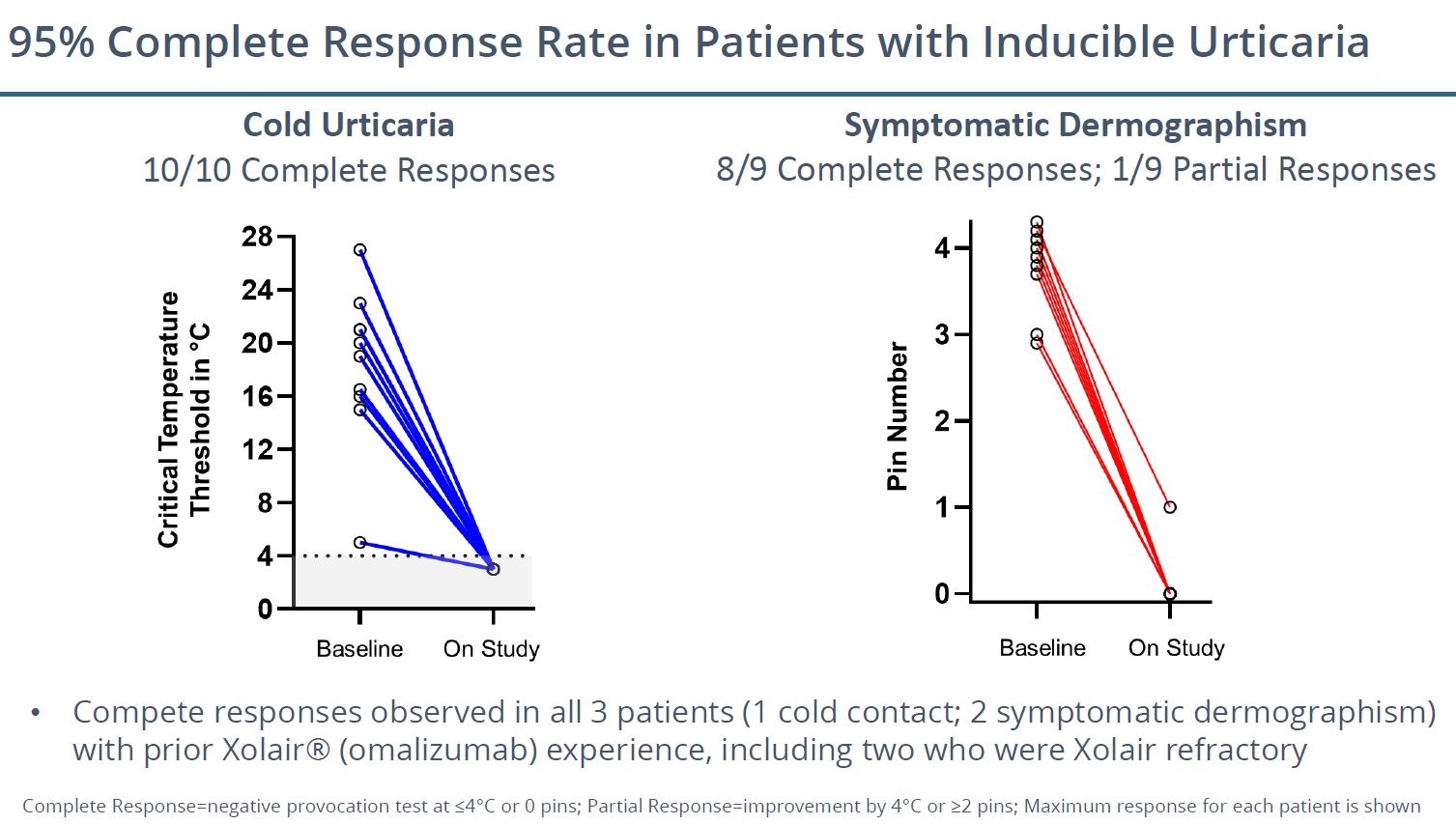 This highlights the rationale behind CDX-0159. Celldex argues that Kit kinase controls the activity of mast cells, whose activation is involved in urticaria.

The company’s EAACI presentation also backed the mechanism, showing that the molecule was able to deplete skin mast cells. The presenting author, Charité’s Professor Marcus Maurer, was especially enthusiastic about this, saying the trial had not only demonstrated mast cells’ key role in urticaria, but also that they can be depleted using CDX-0159, and that such depletion directly reduces the disease’s signs and symptoms.

Kit (CD117) is more commonly known as a target for oncology therapies, including Blueprint’s Ayvakit, Bayer’s telatinib and Cogent’s bezuclastinib, given that mutated forms of this kinase can drive certain cancers. Celldex says CDX-0159 is 100 to 1,000-fold more potent than small molecules like the above kinase inhibitors.

Evaluate Pharma reveals two other developmental anti-Kit MAbs, Jasper Therapeutics’ JSP191 and Magenta’s MGTA-117, but both are being developed as conditioning agents for use before bone marrow transplant.

Celldex says it plans to start trials of subcutaneous CDX-0159 in the third quarter. It also wants to start a trial in prurigo nodularis, a separate skin disease that was seen in one of the enrolled phase 1 patients, and which was said to improve on treatment with CDX-0159.

Celldex has been on something of a rollercoaster since in 2003 being spun out from Medarex, a group later bought by Bristol Myers Squibb. It had tried to float in 2005, but the IPO was scrapped and several small acquisitions followed, before a 2008 reversal into Avant Immunotherapeutics gave it its current stock market listing.

However, its cancer focus took a big hit when Rintega, a cancer vaccine, was first ditched by its partner Pfizer and then flunked a well-designed pivotal trial in first-line glioblastoma. Two years later an antibody-drug conjugate, glembatumumab vedotin, failed in triple-negative breast cancer.

Perhaps with CDX-0159 Celldex has struck it lucky at last.