But data are early, and other groups are also developing less frequent injections for wet AMD.

The wet age-related macular degeneration market is dominated by Regeneron and Bayer’s intravitreal injection Eylea, but other groups are trying to get a piece of the action by developing longer-lasting options. Clearside Biomedical is the latest to join the pack, with promising phase 1 data on CLS-AX sending the company’s stock up 38% yesterday.

Still, these results came in just six patients, and Clearside is a long way from proving that CLS-AX’s effect is as durable as it hopes. The company is already pushing the dose higher, but Clearside will need something special to set it apart from the rest of the long-acting pipeline, which includes gene therapies and high-dose Eylea.

Stifel analysts believe that CLS-AX, a suprachoroidal pan-VEGF inhibitor, has shown “stand-out differentiation” based on the early results from the Oasis trial. The data reported yesterday involved the lowest planned dose of the asset, 0.03mg.

The trial is primarily evaluating safety, and Clearside said there were no signs of toxicity including inflammation, vasculitis, or intraocular pressure increases.

But it is efficacy data that will have got investors excited. Before enrolling into Oasis, patients had been on standard of care anti-VEGF therapy such as Eylea. At the start of the trial they received 2mg of Eylea, the approved dose, and were assessed after a month. Patients’ vision, measured using best-corrected visual acuity, was on average stable, with a mean decrease of 0.2 letters.

Patients then received 0.03mg of CLS-AX. After a month, five of six patients showed an improvement in their vision; overall, the mean increase was 4.7 letters. 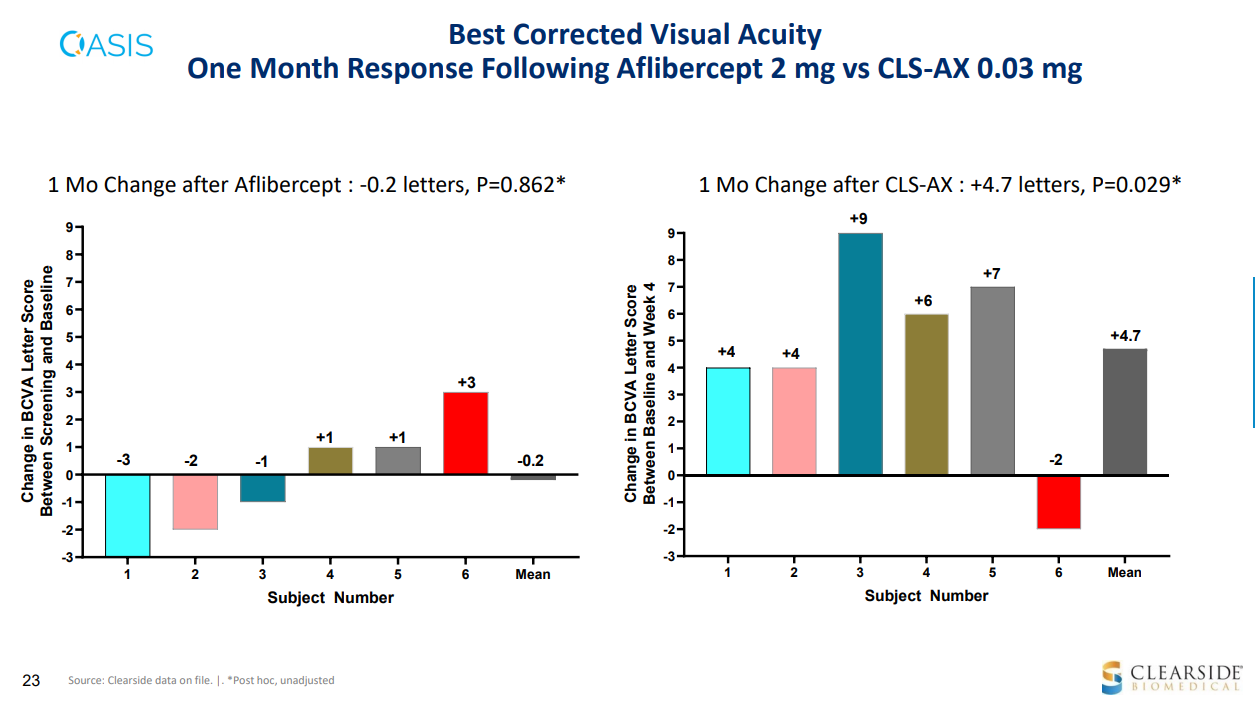 Still, CLS-AX will need to keep showing this effect over a longer time period, and Clearside hopes for durability of six to 12 months.

Here the jury is still out. Only two of the six CLS-AX-treated patients went three months without needing Eylea, although these did continue to show an increase in BCVA, of five to seven letters. The four remaining patients received Eylea after two months.

Clearside now plans to start a second cohort of Oasis, dosing CLS-AX at 0.1mg. There is also scope for a third cohort, at 0.3mg.

If the group can show a long-lasting effect with the higher doses it might have a contender on its hands. But there are plenty of others also trying to get into the long-acting AMD arena.

Some of these projects are longer acting than others. At the more frequent end of the spectrum, Regeneron and Bayer are trialling an 8mg dose of Eylea in an attempt to push injections out to every 12 or 16 weeks. The current recommended Eylea dose is 2mg every two months, after an initial loading period.

At the other end of the scale, gene therapies offer the promise of a once-and-done treatment. However, this field took a blow with a recent toxicity scare with Adverum’s ADVM-022 in diabetic macular oedema; the project is also being developed for wet AMD.

Regenxbio has a competing gene therapy, RGX-314, which it is developing for subretinal and the less invasive suprachoroidal delivery; the latter project uses Clearside’s microinjector technology.

In short, the competition is fierce and Clearside has a long way to go. Perhaps reality began to sank in for investors today – shares were off 10% this morning.

This article has been updated to clarify Eylea's dosing schedule.