Early data show that Freeline’s project can get factor IX levels into the normal range, but the group is still looking for the “Goldilocks” zone.

Uniqure’s haemophilia B gene therapy candidate, etranacogene dezaparvovec, looks good – but is it good enough? Freeline Therapeutics is betting there is still room for improvement and has long claimed that its rival project, verbrinacogene setparvovec, can do something that Uniqure’s cannot: get patients’ factor IX levels into the normal range.

Now data from the phase I/II B-Amaze trial suggest that verbrinacogene setparvov, previously known as FLT180a, could do just that. However, there are reasons to be cautious: Freeline has still not nailed down the optimal dose, and patients will need to receive prophylactic steroids plus tacrolimus, something that is not required with Uniqure's project.

This immunosuppressive regimen will be given to prevent liver enzyme elevations that lead to a loss of FIX expression, something that was seen in two patients in B-Amaze.

During a conference call yesterday, Freeline’s chief medical officer, Julie Krop, insisted that patients should be able to tolerate the immunosuppressive drugs “very well”, especially given that a relatively short course is planned for Freeline’s phase IIb/III trial, which is set to start in the second half of next year.

In an interview with Evaluate Vantage she declined to give the exact details of the immunosuppressive regimen, but said that the tacrolimus dosing would be “very short, shorter than the prednisone, and we've said previously that we're using prednisone for about three months”.

Freeline's chief executive, Theresa Heggie, added: “That amount of time relative to what we expect will be a lifetime of benefit is reasonable.”

Freeline was vague about the exact dose it plans to test in its pivotal study, only saying that this would be between 7.5x1011vg/kg and 9.75x1011vg/kg, both of which were evaluated in B-Amaze.

With these doses, mean FIX activity came in at 36-142% of normal. Freeline’s aim is to get FIX activity of 50-150%, which is within the range seen in people without haemophilia B.

Data on 10 patients in four different dosing cohorts in B-Amaze were presented yesterday. As well as the 26-week data, longer-term durability also looks promising in the patients who did not experience liver enzyme elevations – notably, those in the lowest-dose cohort have now been followed for nearly three years. 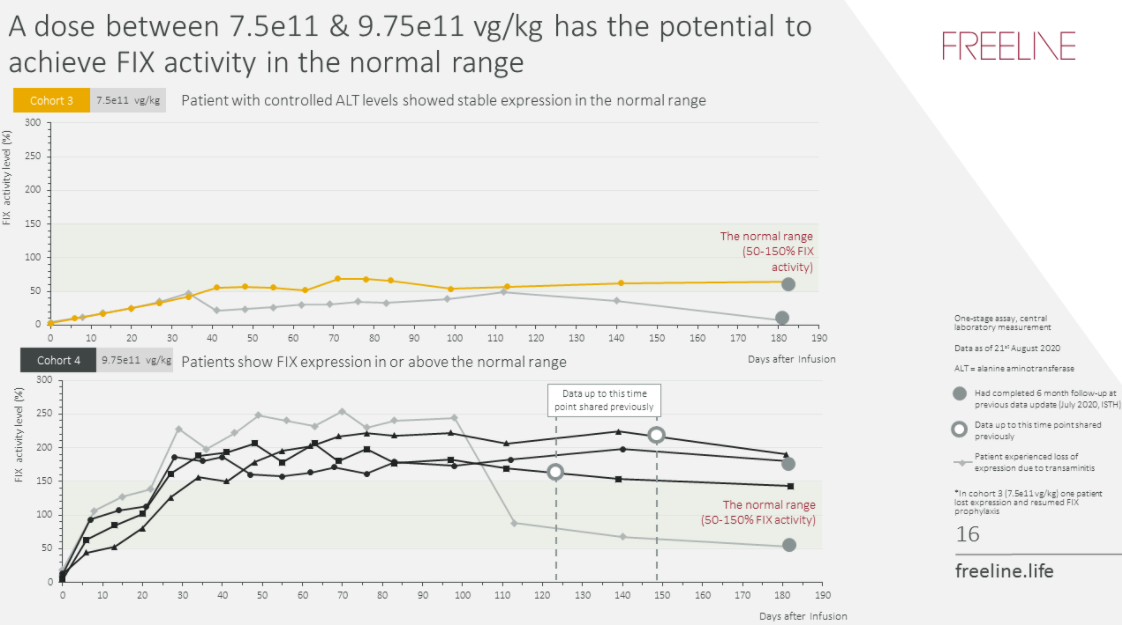 Although this has been heralded as a huge advance, around 30% of patients in Hope-B did not reach 30% FIX activity, and some participants still experienced bleeds.

Freeline hopes to go one step further and eliminate serious bleeds, returning haemophilia B patients to a normal life. The company noted that in B-Amaze there were no bleeds that needed FIX supplementation.

The increased FIX activity seen with verbrinacogene setparvov is down to Freeline’s novel synthetic capsid, called AAVS3, the company’s founder, Professor Amit Nathwani of University College London, explained during yesterday’s call. He said the capsid leads to three to sixfold higher levels of gene transfer compared with other, wild-type capsids, which in turn should spur high levels of protein expression using relatively low doses of vector.

However, Uniqure’s capsid might have an edge in one respect: Hope-B did not exclude patients with pre-existing neutralising antibodies to AAV.

Freeline’s trial did include some patients with neutralising antibodies, Ms Krop told Evaluate Vantage, although there was a cut-off over which patients with these antibodies were excluded. This was intentionally low, Ms Heggie added, without giving details.

Although the data from B-Amaze look promising, the patient numbers involved are small, and Freeline now needs to show that its claims hold up in a bigger population. The pivotal trial will enrol 20 patients initially, and the phase IIb portion will be used to confirm the dose before moving into the phase III portion.

Freeline hopes it will be able to file for accelerated approval based on 26-week FIX data along with 52-week annualised bleeding rate data in a subset of these patients. The study will then enrol up to 30 more patients to evaluate 52-week ABR, which is designed to support full approval.

It is too early to call a winner in haemophilia B gene therapy, according to Evercore ISI’s Josh Schimmer, who added: “Uniqure has a bird in the hand with its dataset while Freeline has a couple of promising ones in the bush.”

Ms Heggie is not concerned about not being first to market. “We know we're probably two years behind Uniqure, but we know patients will wait for the best treatment.”

She also told Evaluate Vantage that, while Freeline is not yet discussing pricing, “we expect to have really strong value proposition if, as we expect, it’ll be a functional cure”.

Freeline still has a lot of work to do, but Uniqure might soon have some real competition.