The group's pulmonary arterial hypertension therapy might work in sicker patients, but investors are unwilling to stick around.

That sound you hear from Merck & Co is a collective relieved sigh. Results on Gossamer Bio’s pulmonary arterial hypertension therapy seralutinib, talked of as a possible competitor to Merck’s sotatercept, are in and they are disastrous.

Not that seralutinib failed in the phase 2 Torrey trial – it met the primary endpoint. But the details missed analysts’ and investors’ expectations by some way, and the 70% plunge in Gossamer’s stock leaves the company in a difficult situation, despite its insistence that it can continue seralutinib’s development.

In Torrey seralutinib showed a statistically significant placebo-corrected improvement of 14.3% in pulmonary vascular resistance (PVR), the trial’s main measure. Unfortunately, investors wanted to see an improvement of at least 20-30%.

To make matters worse, the most important secondary measure failed to hit statistical significance. This was the six minute walk distance (6MWD), where seralutinib-treated patients managed to walk just 6.5 metres further than the placebo group; on this measure, 15 metres was the bar.

The group took refuge in subgroup analyses, saying the agent showed significant improvements in patients with more severe disease. The trial was not well balanced for disease severity, with more mild patients enrolled into the active arm than placebo, something that supportive sellside analysts believe might lie behind the disappointing results.

In patients with WHO functional class III disease, which is on the more severe end, seralutinib resulted in a 21% reduction in PVR and 37m improvement in 6MWD versus placebo. The company gave p values that met the threshold for significance, but had to admit that these were nominal. 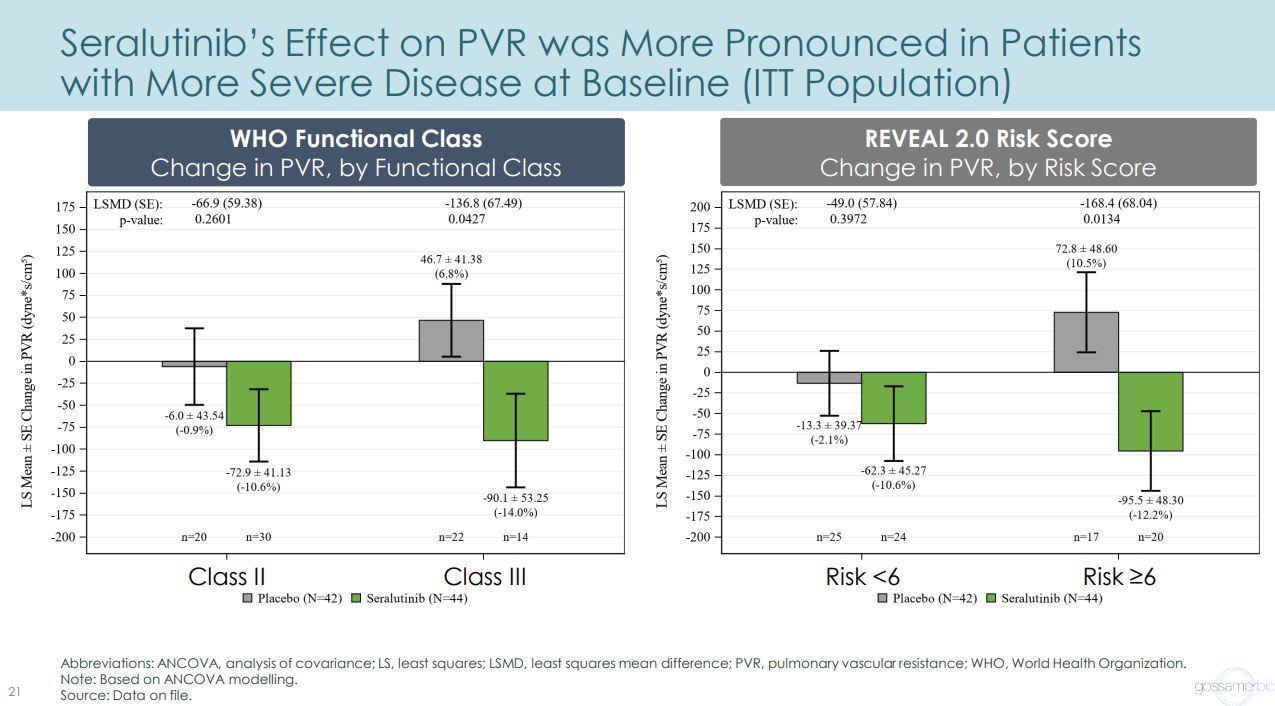 Nominal or not, it is here that the company thinks it can push forward. Gossamer plans to start a phase 3 trial in the second half of 2023 using 6MWD as the primary endpoint. It will enrol patients with functional class III or class II with higher risk scores, and lower 6MWD and higher PVR at baseline.

The issue that will arise at that point is Merck & Co's sotatercept, which could reach the market in the second half of next year. If that happens, the FDA could ask Gossamer to include a sotatercept comparison arm, Gossamer executives conceded on a call today.

Management insisted that this would not necessarily be a problem, since the different mechanisms of sotatercept and seralutinib mean that the two therapies could be complementary. This alleged synergistic action also means patients would still be keen to enrol in the phase 3 trial, despite the availability of sotatercept, Gossamer contends.

As for how this trial would be funded, aside from a passing reference to “the potential for some interesting partnership options”, Gossamer said it plans to use current cash. It added that it would try to enrol in Europe, where the approval timeline for Merck’s drug is expected to be longer.

Gossamer has around $300m in the bank, and this afternoon has a market cap beneath that figure. Its determination to continue with seralutinib might well exceed its means.

Ionis gets a double whammy

Atea and Roche get a Covid-19 antiviral warning