Tiny signs of a therapeutic benefit are offset by safety worries, as the company pivots to higher doses and second-generation projects.

It is little solace to Sangamo investors that the group's lead genome editing project, SB-913, seems to do what it is supposed to – edit a genetic mutation that leads to an enzyme deficiency. The evidence so far suggests that changing the expression of the gene in question has not altered the course of the rare inherited disease in which the project was being tested, mucopolysaccharidosis type II (MPS II). The company is now putting its hopes on increasing the dosage of SB-913.

The latest round of data, released on Thursday at the World Symposium on lysosomal diseases, drove Sangamo shares down 31%, to levels not seen in two years. The contagion was not contained to just Sangamo and its older zinc finger nuclease genome editing technology; names like Crispr Therapeutics, Intellia, Editas Medicine and even Sarepta were also dragged down by this setback.

In MPS II, also known as Hunter syndrome, the mutated IDS gene results in an absence of iduronate-2-sulfatase. As this enzyme usually breaks down glycosaminoglycans (GAGs), these accumulate in MPS II patients, causing tissue and organ damage. The current standard of care is enzyme replacement therapy (ERT) with Shire's Elaprase, but this requires weekly infusions.

In the Champions trial, Sangamo had hoped to show that its zinc finger nuclease technology could insert a working IDS gene. The theory was that this would result in an increase in IDS production and a reduction in GAGs, with the ultimate hope that patients could be safely taken off ERT. Yesterday's presentation cast doubt on most of those hypotheses.

Three doses of SB-913 are being tested: 5x1012vg/kg, 1x1013vg/kg, and 5x1013vg/kg. The presentation concerned six subjects, two from each of the three dosing groups. On the question of whether the IDS gene had been integrated, Sangamo reported mixed results. In the low-dose group, one patient had no evidence of gene integration and one was not evaluable, being unable to undergo liver biopsy. The two medium-dose patients showed evidence of gene integration, but had no increase in plasma IDS activity.

Of the high dose group, one patient could not undergo biopsy to assess gene integration, and results from the other, patient six in the trial, are still pending. But patient six was the only one to show a jump in plasma IDS, though this faded after liver enzyme elevations were seen.

No measurable reduction in urine GAGs was identified in any patients, contrary to an earlier update from the same trial (Zinc fingers get the thumbs down, September 6, 2018).

The glimmer of hope here for Sangamo is patient six, whose transient plasma IDS expression might hint at a dose response and the potential for higher dosing. It will be crucial that, when the biopsy results come back, they show the gene to have been successfully integrated. 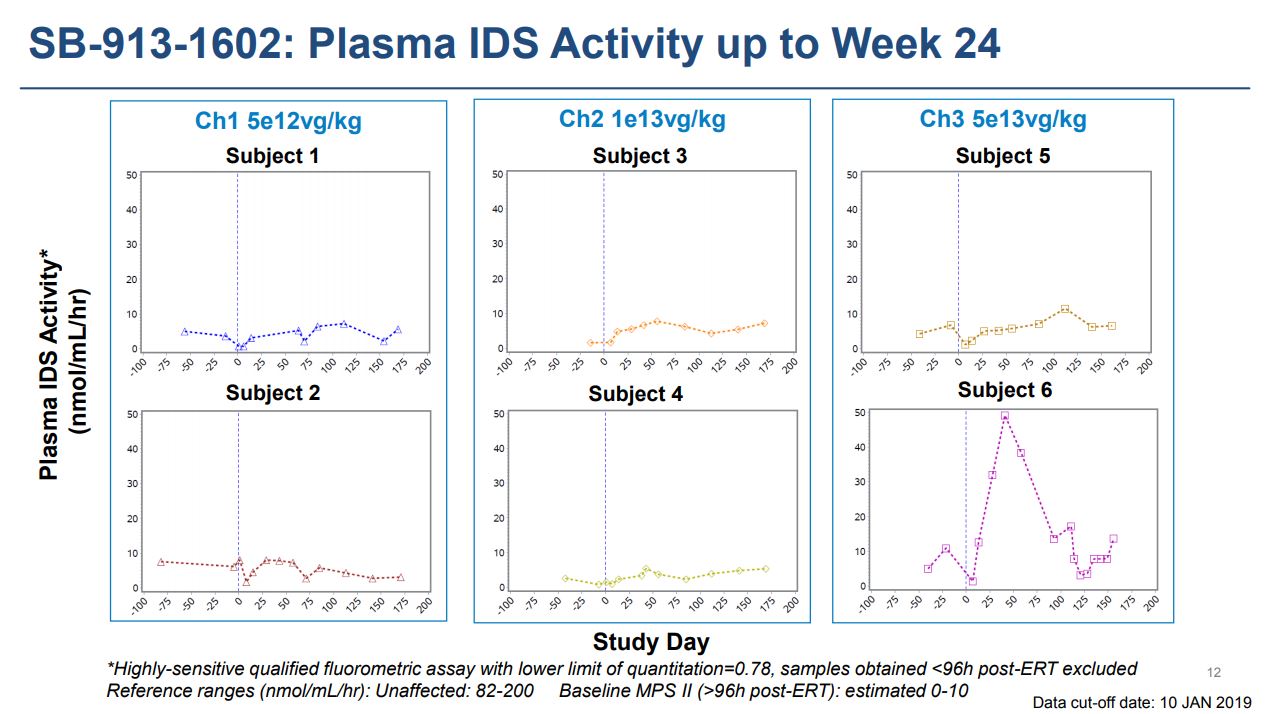 Three patients were taken off ERT, two in the medium-dose group and one in the high-dose. But one mid-dose patient resumed ERT after three months when he experienced fatigue and an increase in urinary GAGs.

Sangamo is not giving up yet. The company contended that, despite the liver toxicity signal, the plasma IDS data from patient six gave hope. More patients began treatment with the 5x1013vg/kg dose at the beginning of 2019.

Further data on patients who have withdrawn from ERT, due later this year, will also be worth watching, the company claims.

But, even if more persuasive biomarker signs emerge, the study might not be sufficient for a regulatory filing. By way of comparison, Elaprase won approval with a 96-patient, 52-week trial that used pulmonary function and six-minute walk test as its endpoints.

Sangamo's chief executive Sandy Macrae yesterday talked up second-generation gene-editing projects that the company hopes will be more potent and that should enter the clinic later this year. This would signal an even longer road to approval.

Sangamo should be applauded for producing the first US data with in vivo genome editing. Unfortunately, it might be the case that its older technology is not potent enough to have a therapeutic effect in this or any other disorder. Investors, many of whom have kept faith with the company for years, have finally lost patience.

Zinc fingers get the thumbs down