Annexon becomes the latest group to provide a confusing update in the disease.

Annexon Biosciences believes that inhibiting complement could stop Huntington’s disease in its tracks. However, after what it called “promising” interim mid-stage data yesterday, the jury is still out on its lead project, ANX005.

The results, from a small, single-arm trial, were contradictory: on the one hand Annexon reported a slight improvement in clinical measures, but on the other there was an increase in levels of neurofilament light chain. Investors had hoped for a decrease in this marker of neuronal injury, and the group’s stock opened down 29% this morning.

Annexon claimed that longer-term treatment might be needed to see an improvement in NfL. But if this is the case it raises questions about the clinical improvement, which might be expected to lag any brain changes.

The company's chief executive officer, Douglas Love, noted during a conference call that ANX005 prevented synaptic loss, which is thought to occur before neuronal loss, providing a potential explanation for the disappointing NfL data.

Full data from the phase 2 trial, including longer-term results, are due in the second quarter, and Annexon will then make a call about taking ANX005, an anti-complement C1q antibody, into phase 3. However, it seems unlikely that these results will provide definitive answers, given the study’s uncontrolled nature. The group might be wise to test ANX005 in a more rigorous phase 2b study before taking the expensive step into pivotal development.

The good news was that in 23 patients evaluable at six months the composite unified Huntington’s disease rating scale (cUHDRS) was similar to baseline. Annexon noted that, typically, Huntington’s patients had a decline of 0.5 points at six months. 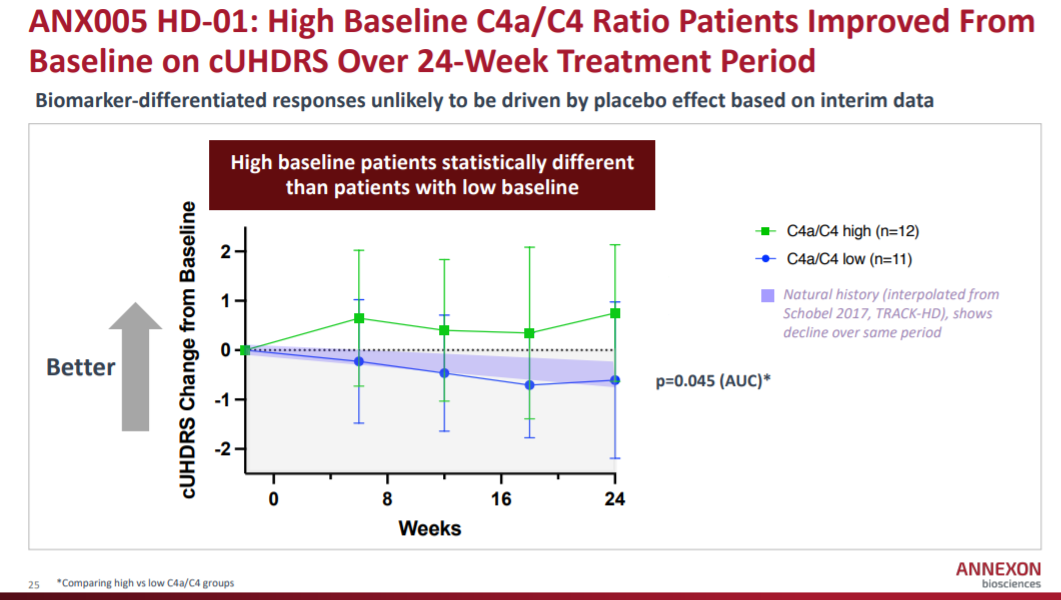 Data looked more impressive in a subgroup of patients with high complement activity at baseline, as measured using the C4a/C4 ratio. However, these results should be treated with caution, given the small number of patients. Moreover, Annexon did not say whether this analysis had been prespecified.

But the bad news was that CSF NfL levels increased, to a degree roughly in line with what is typically seen in Huntington’s, among the 16 patients who were evaluable at six months. 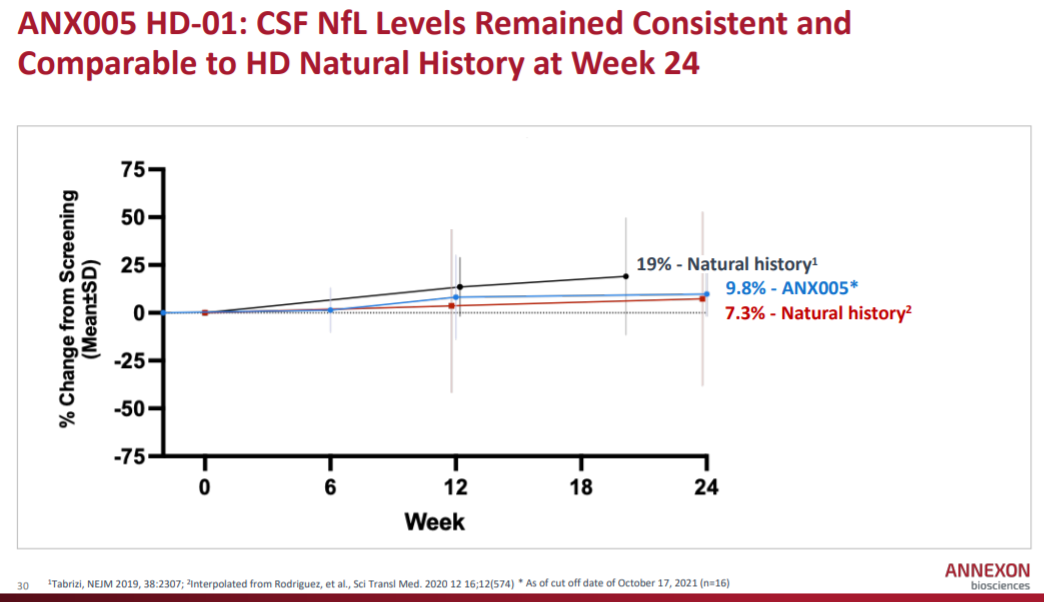 On safety, there were three drug-related discontinuations, with two of these due to severe adverse events: systemic lupus erythematosus and idiopathic pneumonitis. There were no deaths or serious infections, Annexon noted, though two more patients discontinued owing to non-drug-related reasons, including one case of Covid-19.

Given the severity of Huntington’s, this adverse event profile would likely be acceptable should ANX005 prove effective; however, ANX005 is also being trialled in autoimmune diseases, where such side effects could be more troubling.

Annexon is not the only group to have stumbled lately in Huntington’s: at the end of last year Uniqure failed to impress with an update on its gene therapy candidate AMT-130 (Markets punish Uniqure for Huntington’s vagueness, December 17, 2021). Full data with AMT-130 are set for next year, when pivotal results will also be available on Prilenia’s pridopidine, once known as Huntexil.

A strange trend for Uniqure