Immunogen’s Mirasol trial goes down to the wire

It might just be that in today’s biotech market any news, positive or negative, is an excuse to sell. Then again, perhaps the Soraya trial, from which full data were presented on Saturday, has raised fresh issues over mirvetuximab’s potential that warrant at least some of this morning’s 20% selloff in the company.

One problem is safety, with investors being reminded about miretuximab’s ocular toxicity, and one death being deemed possibly treatment related. But the big question is over the absolute progression-free survival number, which has the potential to cause Immunogen a big headache as readout of the confirmatory Mirasol trial, due in the third quarter, approaches.

The company’s plan for mirvetuximab, an antibody-drug conjugate targeting folate receptor alpha (FRα), is to file it for accelerated US approval by the end of this month, based on Soraya, a single-cohort trial. The sought indication is FRα-high, platinum-resistant ovarian cancer, and this is to be confirmed by the Mirasol study, comparing mirvetuximab against chemo.

Soraya had been toplined positive last November, with a 32% overall remission rate easily surpassing Immunogen’s bar for efficacy. The key new detail revealed on Saturday was PFS, and this is where for Immunogen investors the problems began.

On an investor call Immunogen addressed the discrepancy, arguing that for patients to be centrally evaluable they had to have measurable disease at baseline; in 11 patients there was either no measurable disease, or the independent radiologist “just did not feel comfortable putting a caliper there and saying, this is measurable disease”, said Anna Berkenblit, the group's chief medical officer.

The crux of the matter is that Mirasol is designed on the assumption that the chemo control cohort will record mPFS of 3.5 months. There appears to be a significant difference in a theoretical absolute benefit of 2.0 months on the one hand and just 0.8 months on the other.

Immunogen also argued that the Mirasol ovarian cancer population is less heavily pretreated than the one in Soraya. Rather, it said, Mirasol tends to mirror the controlled Forward I trial, which in an FRα-high subgroup showed mirvetuximab to confer a 1.9 to 2.4-month mPFS benefit.

Investors will recall the success Immunogen has had in coming back from the 2019 setback with Forward I, which failed to show a benefit in all-comers. Once the company identified the positive signal in FRα-high patients it designed Soraya to focus specifically on this subgroup. 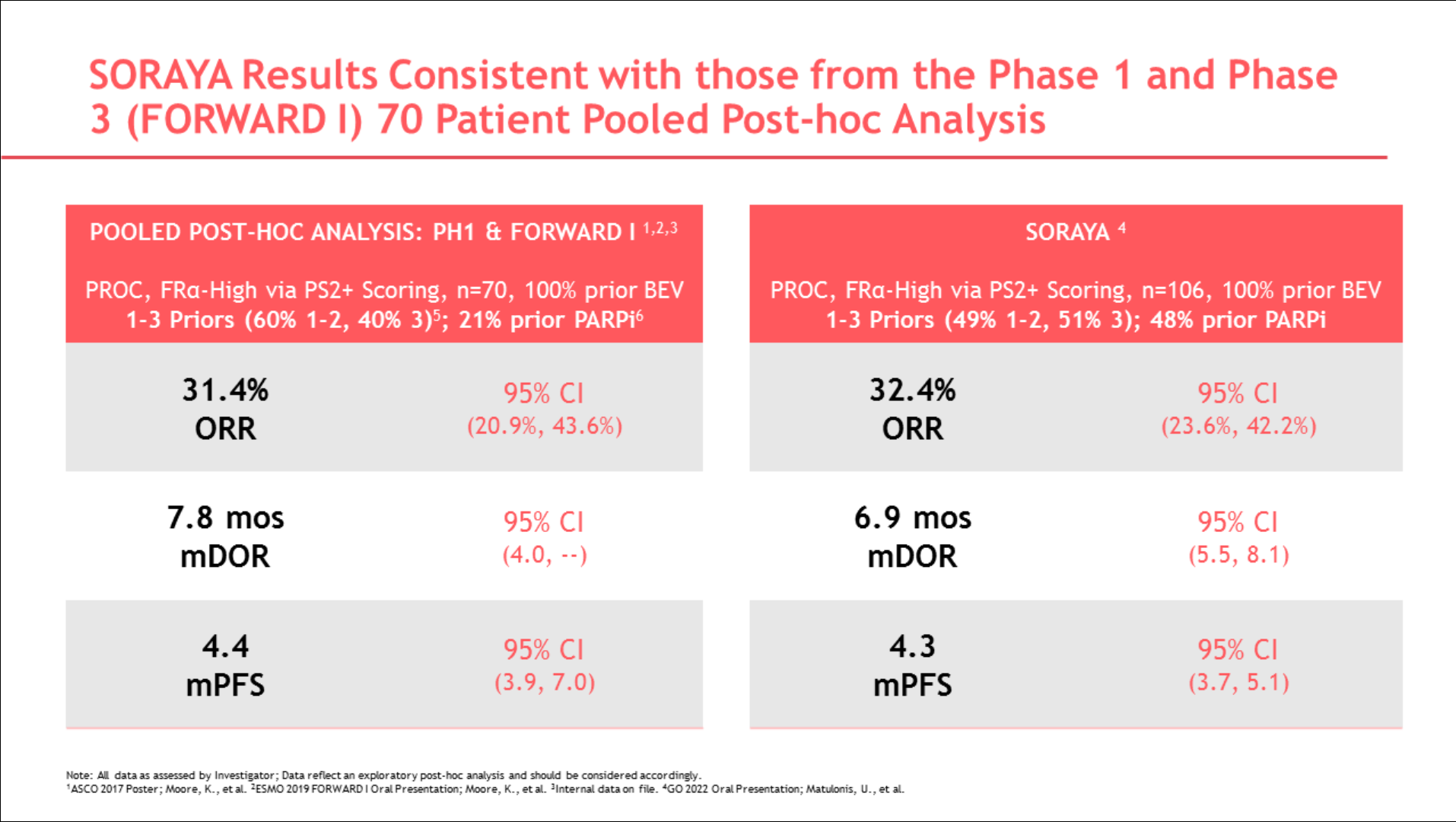 As for safety, 47% of Soraya patients experienced ocular adverse events, comprising keratopathy and/or blurred vision, which the company said were mostly reversible, and managed by supplementary measures and dose modifications. 19% of these events were grade 3 or 4, and there was a separate death, due to respiratory failure, deemed possibly related to study drug.

Another important aspect of Soraya is that it appeared to confirm mirvetuximab’s benefit in patients relapsed on a Parp inhibitor. Forward I had been designed before Parps became an ovarian cancer treatment standard, and only 10% of its enrolees had progressed on them; in Soraya the figure was 50%, and the response rate in these was 38%.

These are tough times, however, and investors are largely not buying the good news story. The risk of Mirasol failing, and the assumption that the FDA will not approve mirvetuximab without seeing at least some Mirasol data, are now taking centre stage.

Merrimack triples on hopes for $225m